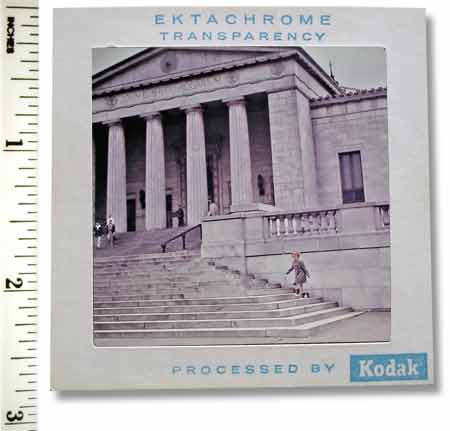 Our charge for scanning 120 format film in slide carriers such as the one to the right, is $2 per slide. They are scanned at 1200 ppi per slide. (Some people refer to these slides as 55mm.)

The Medium format film was created specifically for the Kodak Brownie cameras back in 1900-1901. It was a very simple camera that was basically, fixed focus and "point and shoot." It had a single shutter speed. The "Brownie" camera took its name from cartoon characters that were popular at the time depicting mischievous but good hearted elves.

Medium format means 120 and 220 size roll film. The film is on a spool rather than in a cassette.

Just about every emulsion from the major film companies was available in 120 film. Most were available in 220 as well. The difference between 120 and 220 film was that 220 was twice as long and therefore holds twice as many images as 120. The spool sizes were the same. What differs is that 120 film has a paper backing that runs the full length of the film. 220 film only has a paper leader. Thus more film can be wound in the same space with 220. If you have 35mm negative films that need to be scanned, please see our negative page.

The 6×9 frame has the same aspect ratio as the standard 36×24 mm frame of 135 film. The 6×7 frame enlarges almost exactly to 8×10 inch paper, for which reason its proponents call it "ideal format". 6×4.5 is the smallest and least expensive roll-film frame size; equipment to take photos in this size is also the lightest.

The wide 6×12, 6×17, and 6×24 cm frames are produced by special-purpose panoramic cameras. Most of these cameras use lenses intended for large format cameras for simplicity of construction.

The 620 format was introduced by Kodak in 1931 as an intended alternative to 120. Although mostly used by Kodak cameras, it became very popular. The 620 format is essentially the same film on a thinner and narrower all-metal spool (the 120 spool core was made of wood at that time):

Hence the 620 is sometime referred as "small hole" 6×6 or 6×9 as opposed to 120 "large hole". The 620 format was discontinued by Kodak in 1995, but it is possible to rewind 120 film onto a 620 spool in the darkroom for use in 620 cameras. According to Kodak, the narrower metal spool allowed building smaller cameras. Nonetheless the 120 format cast-metal bodied Voigtländer Perkeo remains smaller than any 620 format camera.