The slide cube projection concept was created by Bell and Howell and they sold these  types of projectors through the 1980s.  The 35mm slides are stored in the clear plastic cubes. Each cube would hold up to 44 of the normal sized 35mm slide in the cardboard type holder. The slide cubes came in a box storage container that was the same size as the Kodak 140 Carousel.

The storage box would hold 16 of the cubes. If there were 40 slides per cube that would mean that you could store about 640 35mm slides in the same area that you could only get 140 slides in the Kodak Carousel. This was a very attractive feature for many people. The slides in the cube were stacked loose. If you were to open the cover on the slide cube and look at the very, now top, slide, it should be the side that should face the screen and it should be the first slide in the slide show.

In order to show the slides, the cube door was opened and the cube was slid into position on the projector.

The slides were advanced by dropping onto a circular, rotating plate, into a machined, slide sized depression in the plate. The depression was small enough so that it would only hold one slide at a time, thus eliminating any doubles.

The slides, after viewing, would then drop down into the slide collection chamber directly below the slide cube.

Sounds like a pretty nifty idea but it had too many drawbacks to survive. The circular round plate was a point of many problems because the 35mm slides would often get jammed up at this point because they might have been a little warped or damaged in some other way. There was not a lot of room for error here and it led to a lot of frustrations.

There was also the problem with not being able to go backwards with the slides more than one slide because, by then, the slides had dropped down into the collection chamber. The slide cubes were also pretty fragile, especially the sliding door/cover.

If your 35mm slides are stored in the slide cubes, we can consider that acceptable storage for our scanning purposes. You do have to do a little bit preparation, though.

We need you to make sure all your slides are oriented properly. See our orientation movie here. All slides should be in the "landscape" orientation. We will rotate the images to view correctly when our Photoshop Technician works them. 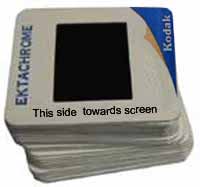 We also need you to make sure that, when you open the sliding door on your cube, that the TOP slide should be the FIRST slide in this cube slide show. All the rest of the slides should be oriented the same way. If this is done correctly, all your slides will be scanned correctly. We will have to assume that you have your slides facing towards the screen even if the logos are not facing towards the screen. Although, occasionally, the films were put into the slide carriers by the processor the opposite of what they should be, we have found that 99% of the time, the logo, if there is a logo, faces the screen.