My Slides Look Good But My Scans Are Out Of Focus

First of all, you may think that your slides are "good" but they may, in fact, be not so good at all. Looking at your slides projected onto a screen or a wall is not the same as putting them under a microscope, and that is what we are doing when we scan your slides. Its completely different. You just do not expect a lot when you are viewing on a screen and everything is blown up. We are very forgiving when we see something on the screen. We are used to it not looking great or we are just looking at one particular part of a very large projection. We think that maybe it is just us or the person manning the projector should focus. When we look at a scanned image on a high resolution computer monitor, we are used to seeing some pretty high resolution images. We don't like seeing something blurry.

Well, unfortunately, most slides, even those taken by professional photographers, have some problems built right into their very design that makes it difficult to get a perfect scan even of a slide that was taken in perfect focus. Slide films come on a roll and they are put into a camera and they are still on rolls. Once they have the pictures taken and the films are processed, the rolled films are cut so that you have the individual pictures on separate films. The films are glued into cardboard or plastic "holders". They are now "slides" and can be viewed in a projector. And this is where there is a problem. If the slide films are not mounted perfectly "flat" so that the film is not warped, then you have a film that can be scanned with everything in focus, as long as the picture was taken with good film and the camera was properly in focus and the focus was placed where the photographer intended it to be. Taking an in-focus picture was not always a given before auto focus cameras and still are not a given. People who took slides typically had more complicated cameras that people who just wanted paper prints.

Be assured that we are going to be trying to give you the best scans that we can, given what we have to deal with. It would not be to our advantage to not to tediously try to make sure your scans are in focus as much as that is possible. That is what we do. We work on your project just as though it was our project.

Here we have a scan of a slide that was taken completely out of focus. There is no way that we can make this be in focus. It is what it is. We scan what you send us. We can't decide for you that this is not a good picture and you would not want it.

For this customer, there were about 60 of these slides, some even worse, all in a row. We suspect that there was a bad roll or two of film or some camera setting that was changed maybe by accident. 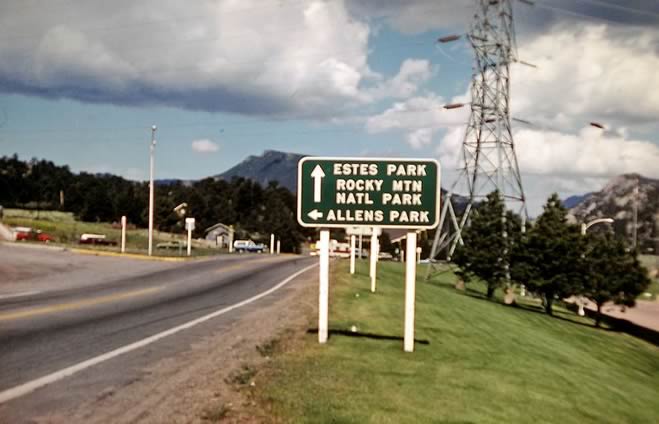 Then, all of a sudden, the slides were in focus. Everything was fine. We didn't do anything different. There is virtually very little that we can do. Our machines are focusing on a piece of film that is fractions of an inch away. We can sometimes change where the particular focus is on that film but you get back from us what you send us, if not better. If your film is warped, the image is going to have a part of it that is out of focus. How bad that is depends on how bad your film is warped.

When the picture is taken, there are so many places that that focus could have been placed. You are dealing with distances that are feet to miles apart. Put the focus on a person in the foreground and then the background may be out of focus. Focus on the mountains in the background and the people in front may be blurry. So much depends on the skill of the photographer and how much he understands his camera and the film he is using. 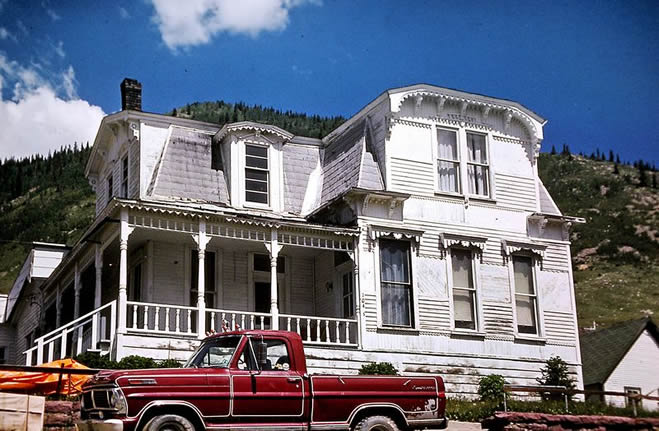 Here is the natural state of a roll of film:

It is common for slides to have a certain "bow" in the film. Kodak even made a special projection lens that would compensate for the "bow". It is called a "Curved Field" lens. Unfortunately, because of this "bow", some parts of the film are not going to be in focus simply because the scanners can only focus in ONE place. So, while your slides may project in focus over most of the slide, it may be because you are using the proper lens on your projector.

Here we are trying to show you one of the problems that is going to cause your image to look somewhat blurry of out of focus even if you have a perfectly in focus slide.

Given the nature of the film being curled to start with from the time it is manufactured until it is processed after you took the picture, it has a curl built into it.

You can see by the light reflections that the film is not flat. It has a bulge in the middle and slopes towards the cardboard each direction.

If you have a magnifying glass or loupe and look at any part of this slide film, it may look in focus to you. The problem is that you are looking at and focusing your eyes on each particular part of the film.

There is just no way that you are going to get a scan of this slide with every part of it in focus unless the film is taken out of the mount and flattened out onto a drum scanner. Drum scanning will typically cost between $25 and $50 per slide. This would be the ONLY way to get a perfect scan in this situation. And that would only be IF you are starting out with a perfect photo. 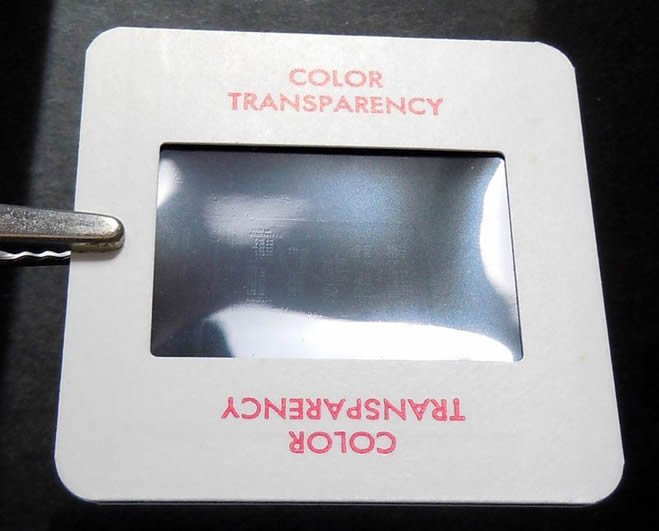 Not only do you have this built in curl to the film, you also have the film being heated and cooled multiple times in a projector. The glue holding the film in the holder may become unglued. It may even be unevenly unglued causing the film to be warped in an odd manner.

Here is an extreme example of a very warped slide film. In this case the slide holder is not warped. You just cannot get a decent scan of this slide. We recommend that you don't send them for scanning. But, we cannot judge that you should not have it scanned, if you send it to us. Sometimes it is better to have an out of focus scan of Grandma than no scan at all. We can't decide that. 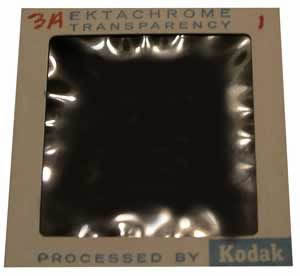 Here we have a scan of a warped slide. The left side is in focus while the right side is not. You can only have ONE focus point. We use our own judgement as to where that focus will be. If you do not agree, we are sorry but there will be NO res-cans for focus. We do the best that we can with your slides, but, at our low prices, you do not have the luxury of being able to have "do overs." 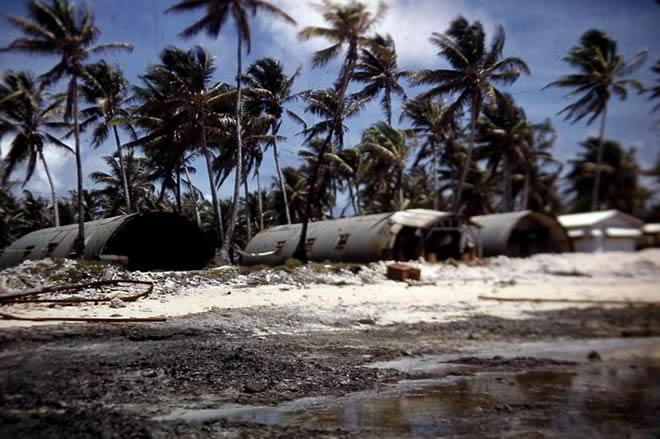 Here is a slide with a reflection grid on it to show the warpage of the film. This is really not too bad when compared to some really bad slides.

This is an example of a very badly warped slide with the refection grid pattern showing the warpage. 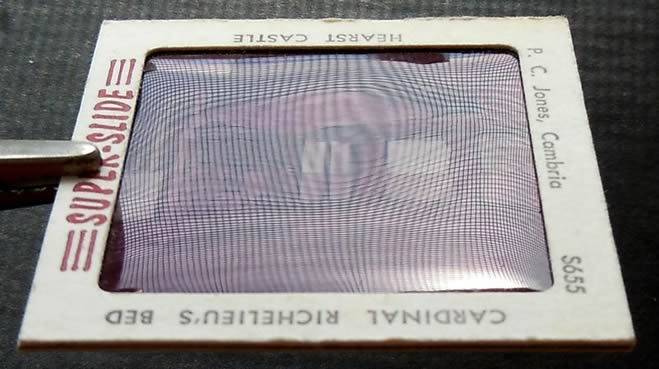 You can also see the warpage here. If the film were flat, you would either see a dark film or light film, overall. You can see the distorted film by the light and dark refections. 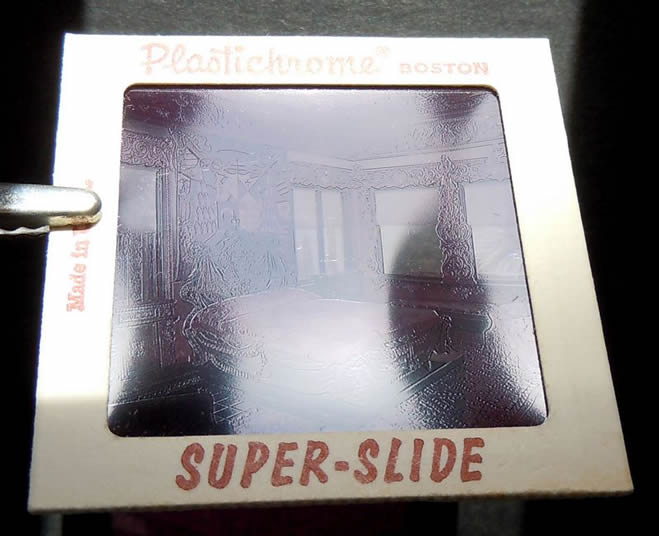 And then we get to the problem of not just the film being warped but the slide holder being warped. This multiplies the film warpage / focus problem. There are also slides that "pop" when they are heated up because they have been looked at too long, in the past, under the high heat of your projector lamp. They have become conditioned by the heat. When they are cool they are relaxed and when they heat up they stretch tight. If our scan is triggered while the slide is "popping" this could result in a somewhat blury scan. We can't time the "pop" or know when it will happen. At our low prices, we can't go back and find a slide that may have had this happen and rescan it.

Again: We work with what you send us but we only do "Magic" not "Miracles." 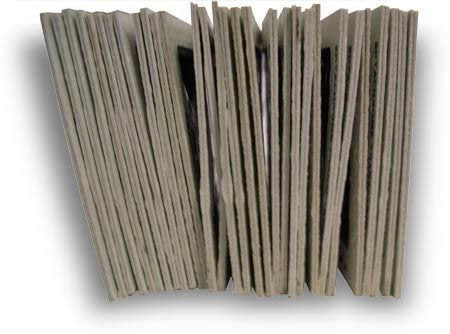